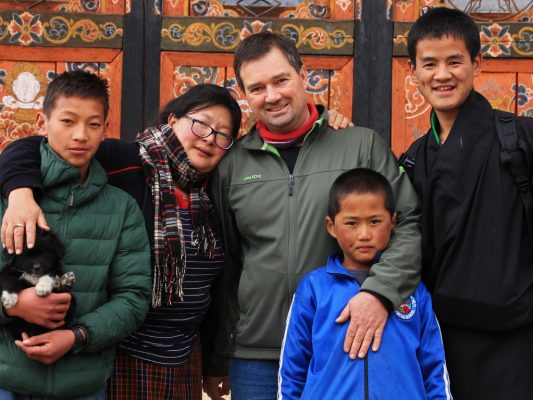 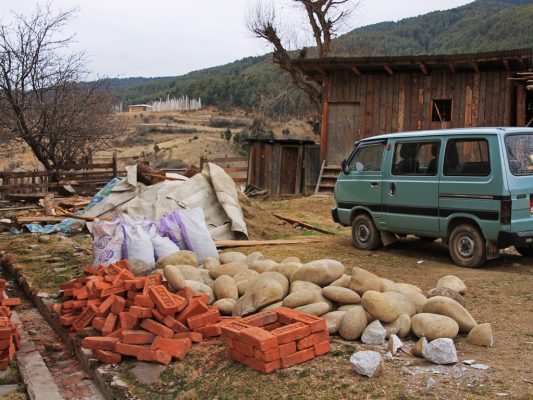 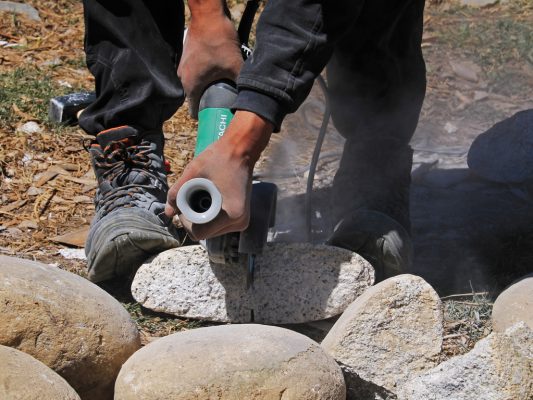 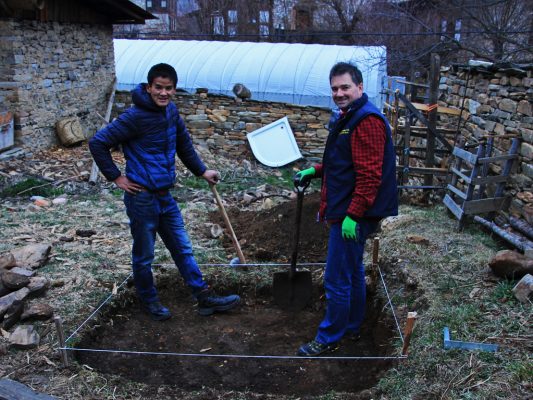 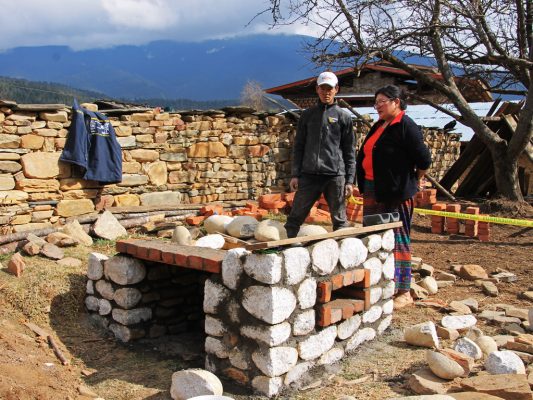 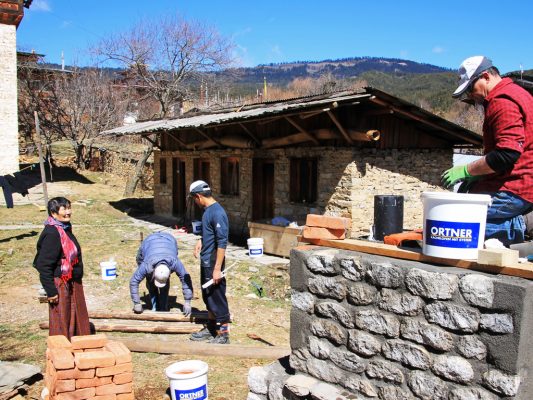 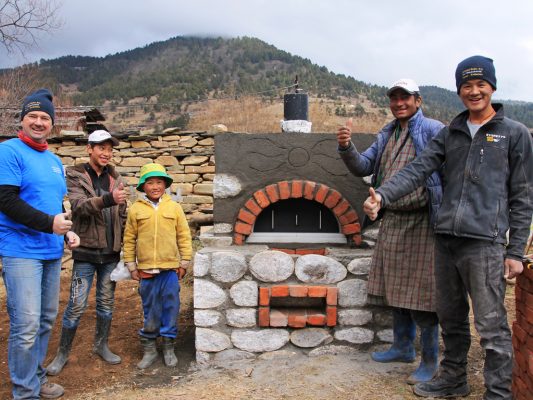 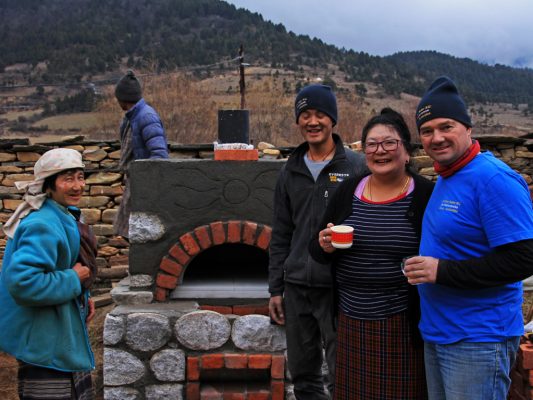 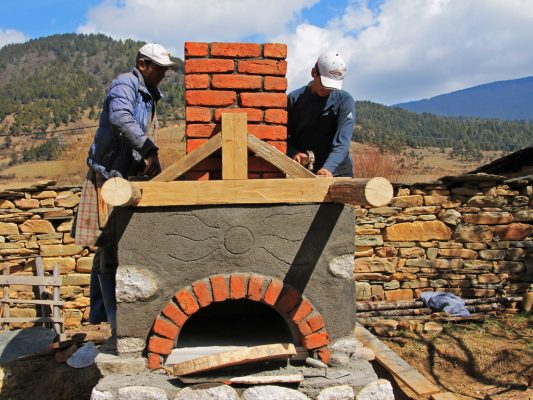 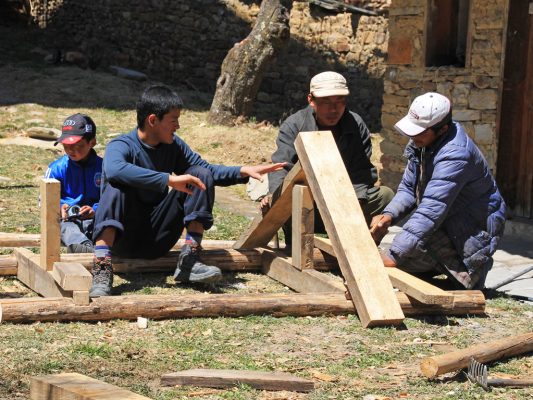 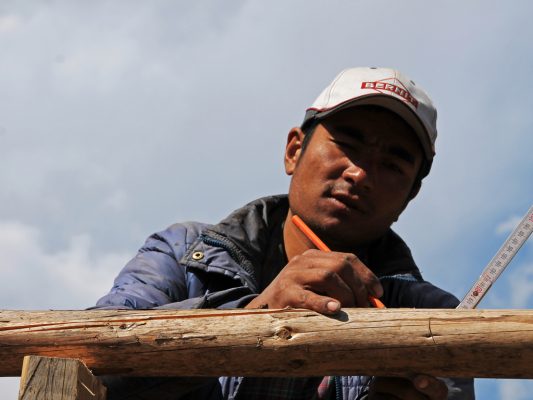 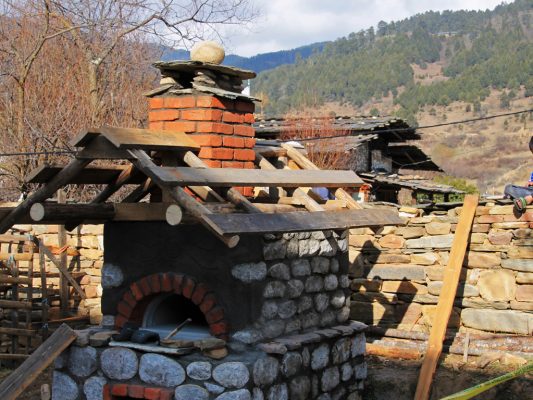 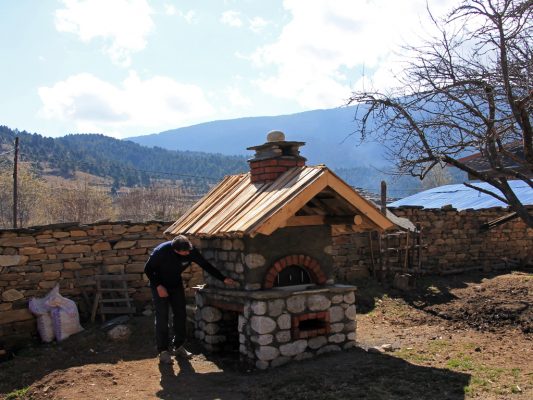 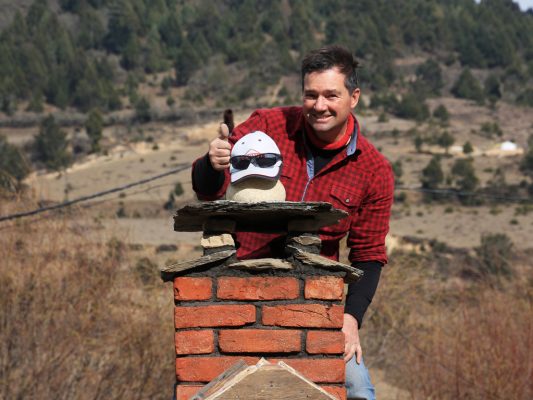 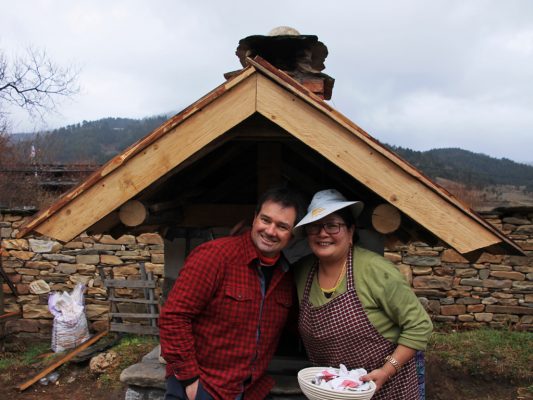 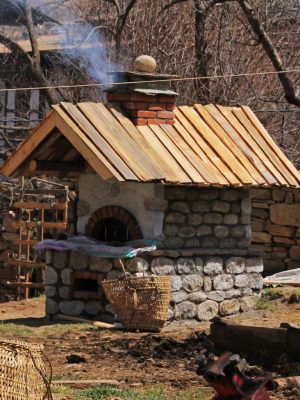 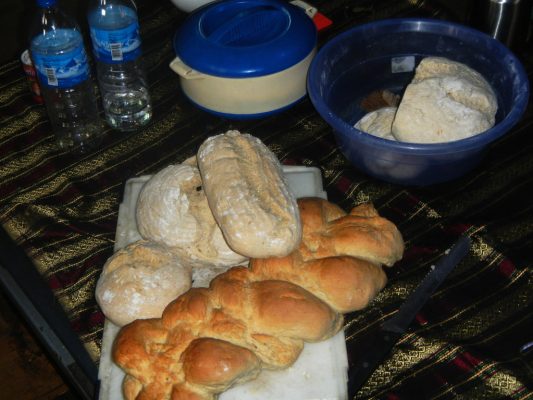 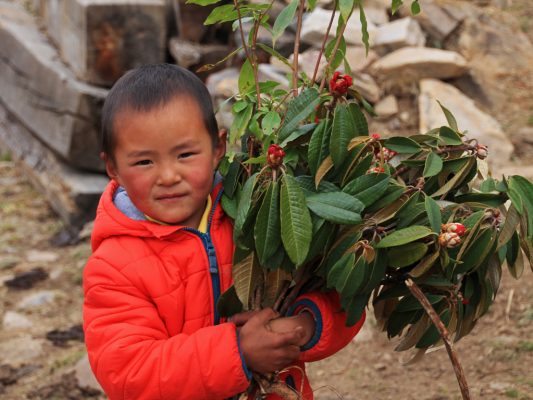 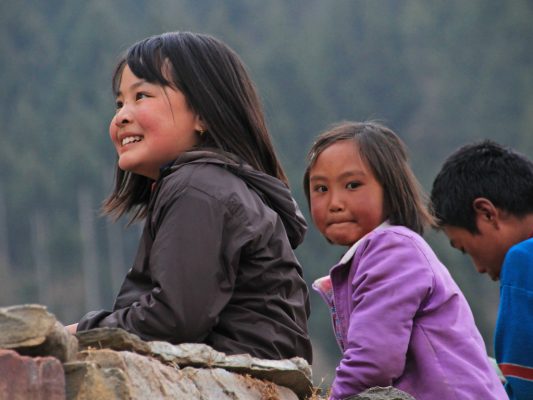 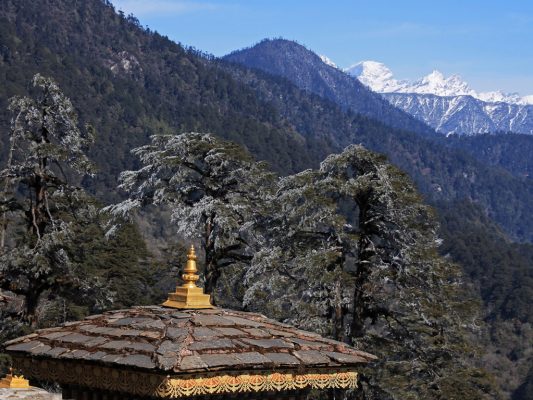 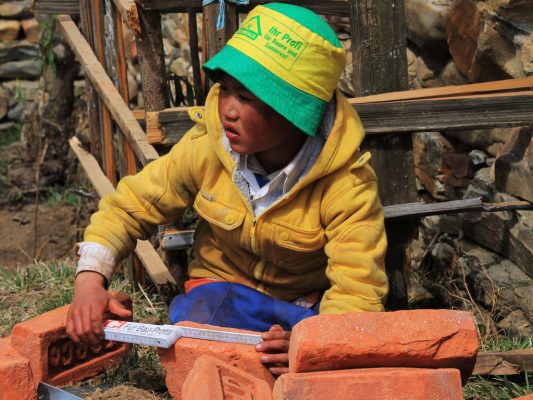 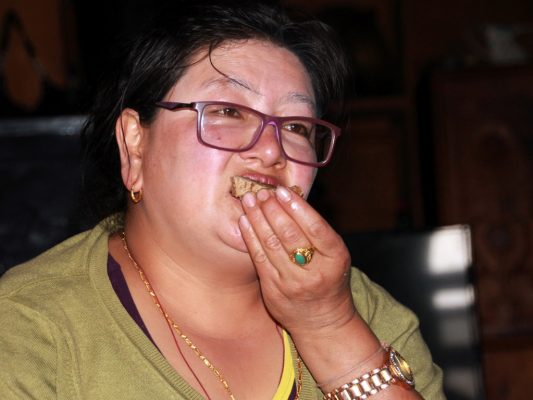 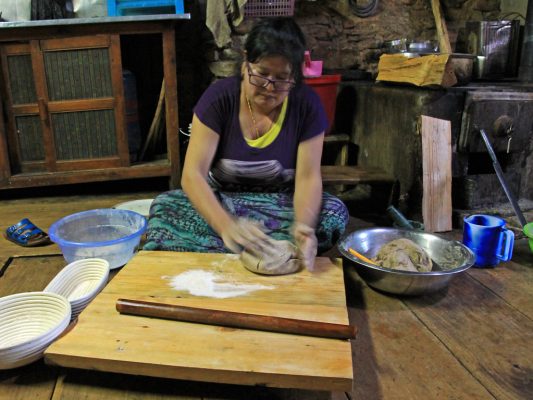 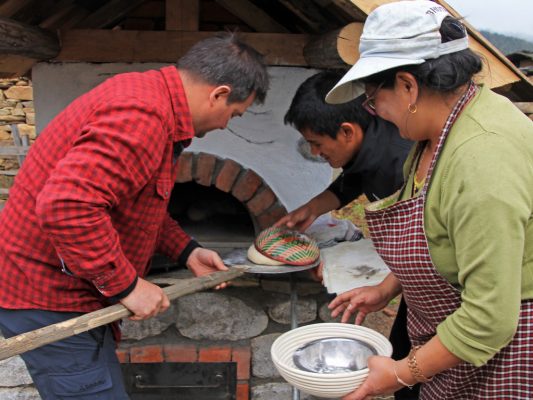 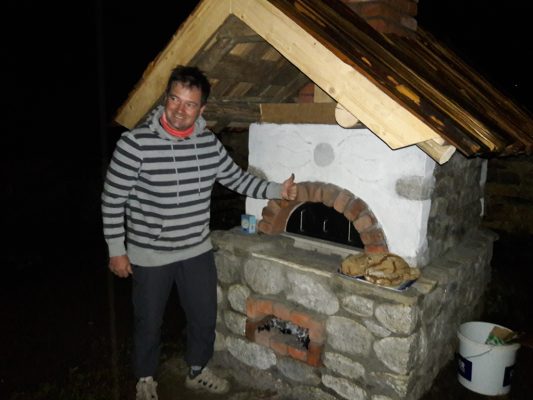 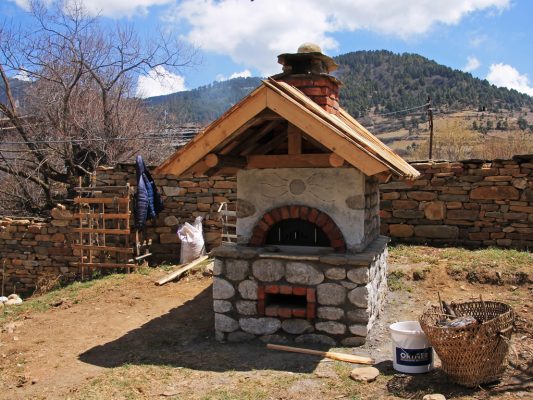 For the second time master stove-setter Christof Bader came all the way from Bad Gastein in Alpine Austria to the little Himalayan kingdom of Bhutan. Yet again, the Austrian non-profit association Bhutan Network had planned and organized the building of a bread baking oven together with Bhutanese villagers. The oven will offer a start into new and exciting opportunities around the art of bread baking.

Photography and original text in German by Silvia Schmid (2015)

“I hope you understand what this means to us!“ Tashi says with awestruck glance at the freshly baked bread in front of her. Christof had just pulled it out of the new bread oven.

It was the first critical test after completion of the bread oven and it was successful! Tashi, a farmer from Ura, distributes the sweet smelling bread. Everybody has earned their share because they had all worked hard to make this dream come true: Jigme (12), Ugyen (16), Kencho, a helpful and very talented neighbor, and of course Sonam, a Jack of all trades, who already became acquainted with the art of oven building in 2015 when he stayed for a while with Christof and Silvia in Austria.

Likewise, Tashi spent two months in Austria in 2014 as a candidate of the Organic Farmers Exchange Programme (OFEP), an initiative by the non-profit association Bhutan Network. She was lucky to spend some time with Roswitha Huber at her mountain chalet in the Alps of Salzburg. Roswitha is a well-known bread baking expert in the region who holds workshops for school kids and adults alike, on where bread actually comes from and how it is produced. Tashi also became deeply inspired by the art of bread baking, and her big dream since had been to build a bread oven in Ura, her village in Bumthang, Bhutan. “We do not know bread baking“, she explains, “but we want to learn it, for our guests and for ourselves. It is something new and exciting and it blends in well with our culture”. 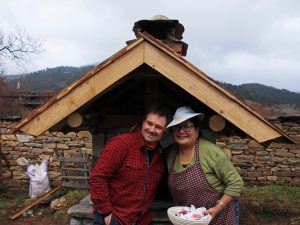 Bhutan Network also supports sustainable and holistic homestay development in rural areas, similar to the concept of “holiday on farms” in the Austrian Alps. This should offer new perspectives for young people, and counter rural urban migrations, a problem Bhutan also has to face: whilst the capital Thimphu is bursting at the seams with numerous cars blocking the few roads, in rural Bhutan – the rest of Bhutan so to speak – it grows quieter every year, and villages are emptying fast.

For Christof, the 300km drive from Thimphu to Ura village in Bumthang was a wild ride that took 14-hours on bumpy and winding roads. The oven building team endured anxious hours wondering if the material had survived the roads. They thought it a miracle when the Pick Up car and cargo reached safely at about 3200 m.
While Sonam and Tashi already knew what was going to happen over the next few days, the villagers couldn’t really grasp what was about to come. Despite having seen pictures of the upcoming bread oven they were curious and unsure about how this would take shape in Ura. Surrounded by relatives, monks, old men and young women, and while preparing food for all, Tashi eagerly explained about the ambitious project she had waited and wished for so long. Her audience was puzzled: incense ovens are needed to chase away evil spirits but a bread oven?

„In this particular case it was more important for us to build a 100% reliable and maintenance-friendly bread oven in a short time, which should enable everyone to learn how to bake bread.” 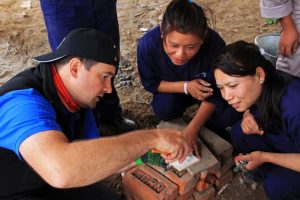 Christof was quite familiar with the situation from his last visit in 2015. Within a workshop the aim then was to explore what would be feasible in terms of oven building in Bhutan. Together with the vocational trainees of a technical training institute he built a small but functional sample oven using exclusively local materials.
However this time in 2017, thanks to the generous support of various donors the most critical equipment was shipped from Austria: a special fireclay interior application, a tool box, a cutter with diamond discs, an oven door and miscellaneous work equipment. An Austrian cargo company helped with the shipment. A pile of boulders, sand, cement and gravel was arranged locally by the Bhutanese.

„In this particular case it was more important for us to build a 100% reliable and maintenance-friendly bread oven in a short time, which should enable everyone to learn how to bake bread.” explained master stove-setter Christof. It was Tashi’s idea to train her fellow villagers in the art of baking bread “Just like Roswitha does in Rauris!”

Power outage and “plan B”

But first the oven had to be built: Often, the flapping of the prayer flags in the strong wind of Ura was the only audible sound while the foundation was dug. Calmly and steadily, in the thin air of this altitude, the team carried boulders, bags with cement and buckets of sand to the construction site. When Christof heated water with an immersion heater and put his finger inside to test the temperature Ugyen yelped horrified “if you do that with one of our devices you are dead!” Sonam started cutting the river boulders with a Flex and at once some villagers gathered, excitedly flailing their hands and discussing. “They are astonished that we can cut such huge boulders with such a tiny machine” Sonam remarked smilingly. During a sudden power outage which lasted for days nobody got angry. Later the water was also gone. In Bhutan folks are used to switch to “plan B” and from now on the boulders were cut the traditional way: by hand. Nothing can be enforced in Bhutan. 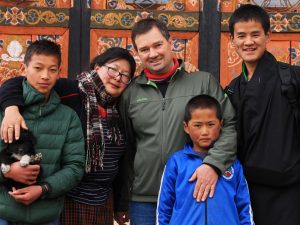 Every evening hot milk tea and ara were served, and although Tashi’s fields were still empty the pots on the mud stove were filled with fresh greeneries. Delicious fern, green asparagus and tasty tree mushrooms were already growing abundantly in the forest. These delicacies were served with hot chili sauce and cheese along with plenty of rice.

Despite thorough planning in the run-up to the project, improvisation was often the best plan. Nevertheless the oven started taking shape and after a few days the core was set up. With millimeter precision Kencho and Sonam were timbering the roof while Christof built up the oven wall. After the roof was done the village ladies gathered and offered hot ara. “Only eggs” Tashi smilingly reassured Christof when he suspiciously eyed the indeterminable substance. It was ara with honey and fried eggs and after a few sips it tasted delicious!

The fire test and happy faces

Finally, the oven was given the last touch up of paint and then the great moment arrived: the so called fire test. Again curious villagers gathered and cheered the plumes of smoke escaping the chimney ascending to the sky. In the evening Tashi prepared sourdough. The most exciting moment approached when Christof pushed the bread loafs into the oven. After impatiently waiting for a while he pulled out the bread again, a moment reminiscent of a fairy tale. 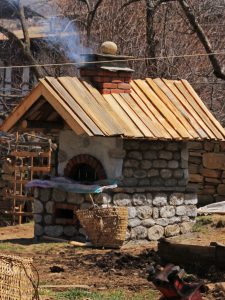 “A dream has come true for us in Ura”

A new scent of freshly baked bread was in the air and everybody sat around in devotional silence chewing pieces of bread. “A dream has come true for us in Ura” Tashi says again and again in a moved tone. “You have really come here to do this for us! It is a sign, a new beginning for us in Ura!”

If you would like to support Bhutan Network projects you can make a donation below. Thank you very much!