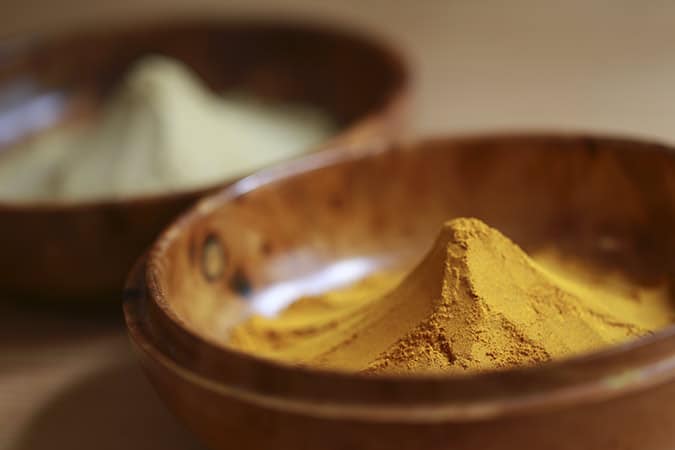 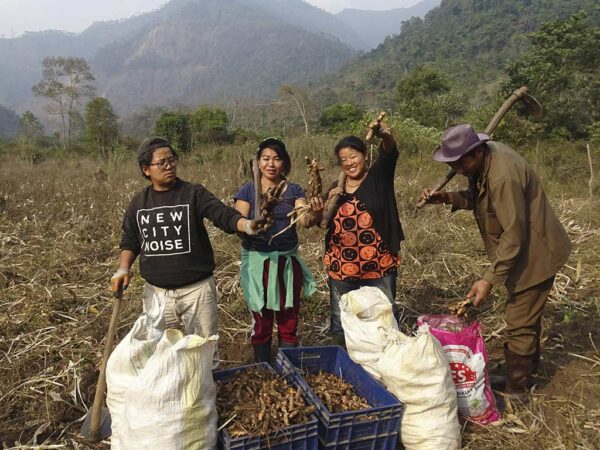 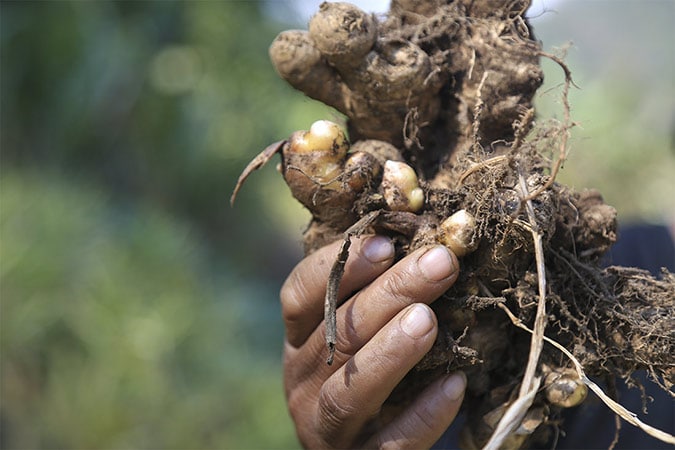 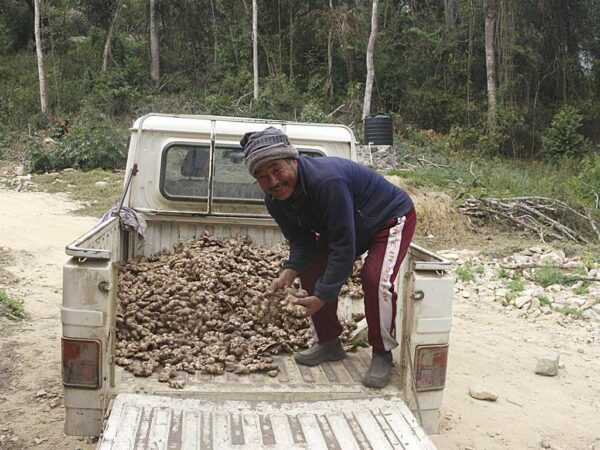 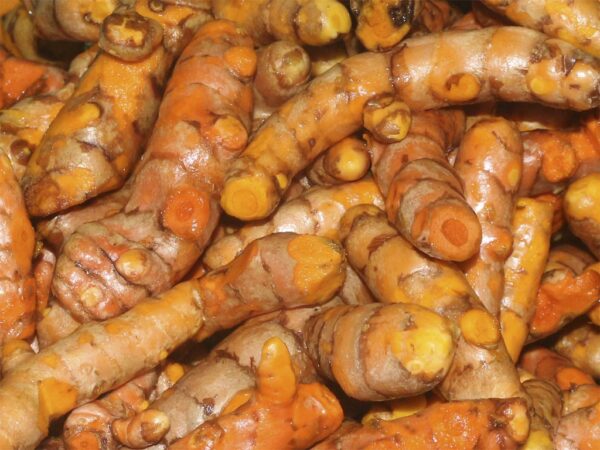 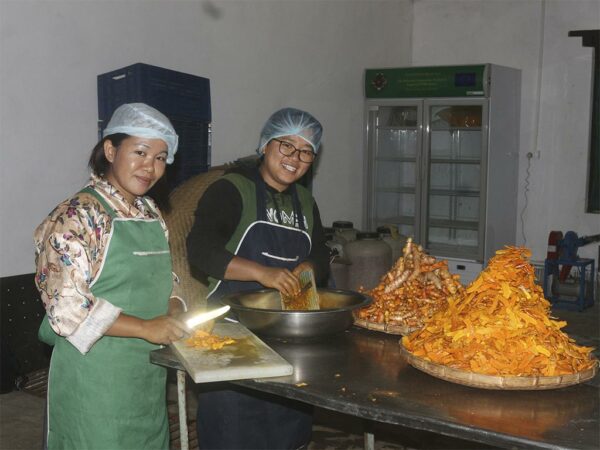 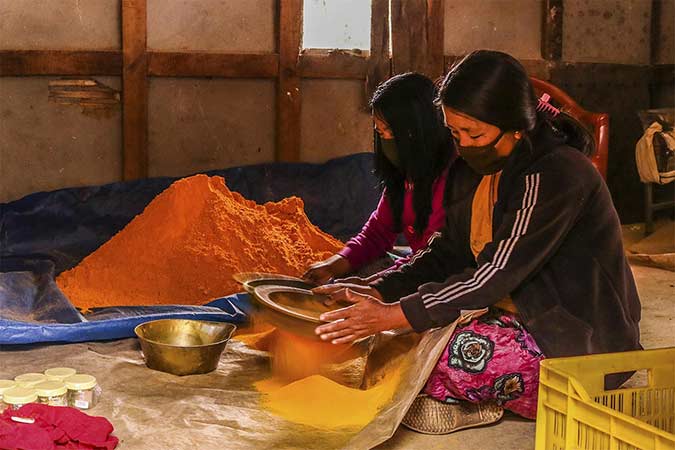 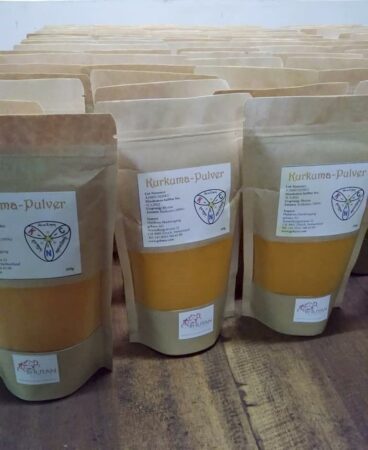 In the happiness kingdom, wildlife and rural-urban migration challenge the livelihoods of people living in the villages. A youth cooperative from Zhemgang has set out to counter these challenges by marketing naturally grown turmeric and ginger.

Khengrig Namsum Cooperative (KNC) is a farmers cooperative in Tingtibi. This cooperative was founded in 2014 with the aim of improving the livelihoods of the people of Zhemgang Dzongkhag through the creation of a reliable, profitable and sustainable market for agricultural products. KNC employs 16 young farmers (9 women, 7 men) of Zhemgang district who have a high school diploma. With the support of the Bhutanese government, Bhutan Network and the Swiss NGO Helvetas, KNC was able to set up a post-harvesting and food processing unit.

Some of KNC staff members:

Cultivation and post-harvest processing of turmeric and ginger

Ginger and Turmeric are highly valued spices in Asian cuisine and believed to contribute to bodily and mental wellbeing. KNC cultivates turmeric and ginger on fallow. The fields are protected from livestock and there is only limited interference from wild animals as they seem to spurn these root crops. During sowing season, litter of leaves and humus from the nearby forest is added and no chemical fertilizers are used. The farmers harvest the turmeric and ginger roots during the first two weeks of January. The roots are washed, cut and dried in electric heaters. In a next step the turmeric and ginger roots are mechanically grinded and sieved 3 to 4 times before packaging.

Access to a wider market for locally grown and processed turmeric and ginger will empower the farmers of Tingtibi. In a fast changing world, farmers need to be able to keep up and generate income in order to maintain a degree of economic independence.

Furthermore, access to market will create the much needed incentives for young Khengpa (people of Zhemgang) to remain in the villages and come up with creative ideas to expand the local range of marketable products based on fair and sustainable principles.

Background on agriculture in Bhutan

In Bhutan farmers largely depend on subsistence farming for daily sustenance. They grow a variety of products such as grains, rice, maize, vegetables and fruits and sell the surplus in local markets to generate the much needed cash income. Each farming household constitutes an economic unit and farmers help each other during certain agricultural tasks, from jointly cultivating fields to mutual help during social and religious events.

Tingtibi in Zhemgang is a very remote sub-tropical place in central Bhutan at approx. 600 meters above sea-level. Some farmers of this beautiful region, especially the younger generation, have formed the Khengrig Namsum Cooperative (KNC) to pull together their skills in order to create synergies. They plan to jointly market their products to generate some cash income. Earning cash in farming can be challenging but these efforts are necessary to ensure survival of those who remain in the villages. By joining forces the group also hopes to make their voices heard at the National level, raising awareness of the situation for youth in villages. Creating income niches and incentives are important measures to counter rural-urban migration of young educated farmers. They oftentimes do not see a future in traditional farming and migrate in large numbers to the capital Thimphu, the only major city in the small kingdom. However, working odd jobs they barely make ends meet.

Another important reason for abandoning farming is the on-going wildlife encroachment issue that leads to considerable crop shortfalls every year. As a Buddhist country, game keeping and hunting as a means to manage wildlife are not considered an option and remedies like electric fencing will not solve the issue in the long run.

What you can do

Support the 2nd round of our export project with Khengrig Namsum Cooperative by purchasing turmeric and ginger powder. You can order on gebana‘s market platform.

Order in Swiss Francs Order in Euros
We use cookies on our website to give you the most relevant experience by remembering your preferences and repeat visits. By clicking “Accept”, you consent to the use of ALL the cookies.
Cookie settingsACCEPT
Manage consent